Over the past 7 years I’ve been honing my development toolkit to ensure I have a reliable and easy to use setup that enables me to be productive. This post takes a look at my current development setup, from the hardware, to my terminal setup, to my trusty editor software.

I’ve been a big fan of Apple hardware for a long time now, both at home and at work I’m running a Macbook Pro (13” at home, 15” at work) and both are plugged into 27” Cinema Displays. There is just something nice about being able to use the cinema display as a dock for network access, USB connections etc.

On top of that I use the full size mac keyboard and the wireless magic mouse.

To ensure I have a happy time working with OSX I make use of the fantastic homebrew package manager. This makes installing and managing packages a breeze, it’s also really well supported and maintained giving me a lot of confidence in what it delivers.

Right now I have quite a few packages installed, some are dependencies for normal development, others are specific to things needed for work projects.

For managing Ruby I make use of rbenv by Sam Stephenson. This allows me to have multiple versions of ruby installed at any one moment and easily switch between them for a local folder or globally on my whole mac.

Whilst the terminal in OSX is great, I prefer to use iTerm 2. I think this is mostly a personal preference thing, but it does provide some good shortcuts which make it a lot easier to use. It also comes with Split Panes and better support for colours and the mouse.

To spruce up the default bash prompt in OSX, I have a custom bash file which I initially based on @damian’s .bash_profile

There are also several useful short commands for navigating folders, working with git and bundler.

You can find out more from my dotfiles or more specifically my bash_aliases file.

Prior to working at Sage One I would mainly use textmate and occasionally coda.

When I started at Sage everyone was using Vim. It didn’t take long for me to become hooked and I’ve never looked back since. Infact I regularly find myself typing Vim commands into things like Outlook and Word.

One of the key things to reducing the barrier to entry for Vim was that everyone around me was using it and I was able to learn directly from pairing up with other developers. I also quickly started to craft my own dotfiles based on how they had their environments setup - much easier than starting from scratch!

I make use of the vundle plug-in manager for vim which enables me to easily keep track of and configure my plugins. I have several plugins installed, although I use some alot more than others:

The following are permenently visible on screen:

I use these ones all the time

These ones are just always on in the background

The following I use infrequently 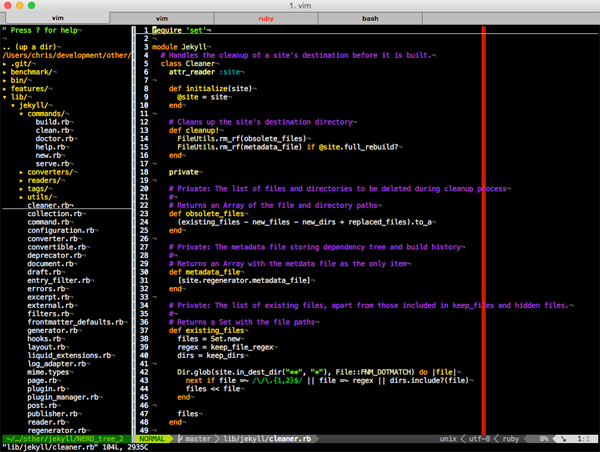 The great thing about Vim is that being text-based makes it really lightweight which means it’s fast and responsive even with large files.

Being keyboard based it has a lot of key bindings so everything is really close to home and I find it makes me a lot faster at typing without having to think much about it. Leaving my mind free to ponder on the code I’m working on.

Another advantage about Vim is that it works great with TMUX to allow for pairing with remote colleagues who could be in a different country.

Of course there are downsides to vim, the integration with the mouse along with copy/paste can be frustrating at times, but still more than managable.

I hope you found this interesting, feel free to ask me questions on twitter @chrisbarber86 or take a look at my dotfiles on GitHub.